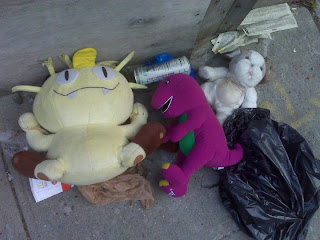 In English there are two essential types of words: 1) words that have to do with objects (nouns) and 2) words that have to do with actions (verbs). And, just as Aristotle claimed of onoma and rhema, any structure that weaves these two types of words together is where discourse takes place. But another way of reading this “weaving together” would be to say that in discourse, or logos, we discover that essentially “objects act.”

In a recent discussion I had with my dissertation director, we came to the conclusion that this phrase (“objects act”) is the only way to describe the show on the History Channel entitled, Life After People. For those of you unfamiliar with the show, it is roughly 40 minutes of watching buildings, landmarks, and cities crumble back into the earth. But what is fascinating about the show is its reliance upon the human gaze. For the only reason that this show is fascinating to its human viewers is because of the amount of significance we have given to each of the objects we watch deteriorate. Without significance there is no difference between the Statue of Liberty falling into the ocean and the face of a cliff. Significance is the recognition of the gaze, and without it we are left with the fact that “objects act”.

The human gaze or the look, then, becomes the death of the onticological object in the sense that the object is now significant. Significance does away with the object as anything other than its use, its purpose. For it places the object in a Latourian black box and throws away the key. Significant objects are separate from the everyday, from the ordinary in a way that demarcates them apart from even their own object-ness. For example, my daughter's stuffed toy dog is extremely significant for her since she's had it since she was born. She knows this object inside (after it was ripped open at one time due to excessive play) and out. And if we were to attempt to replace it with a new, cleaner version, she would almost certainly break down in tears. There is NO other stuffed toy dog for my daughter.

So if the goal of OOO/P is to remove the human subject as the pole around which the tether-ball of the world circulates, then surely it must be a blind ontology. By removing the look, or the gaze, it sees nothing/everything. The object oriented philosopher's gaze, then, is one of an impossibility, of a type of void or a field of vision without a blind spot (where infinity is as limitless as nothingness). But in this way, I wonder what more can be said of objects besides “objects act.” Isn't any move beyond this an act of signification, where objects become monads, vacuum-packed withdrawals, or differences that make a difference? Aren't all of these now significant objects?
Posted by Nathan Gale at 1:23 PM