I recently watched an episode of Nova called "Hunting the Hidden Dimension," - an episode devoted to the history and uses of fractals - and took away two important points: 1) that even the most complicated and seemingly chaotic systems often have a simple pattern, and that in order to see said pattern we simply need to change the scale at which we observe the system; and 2) that this aforementioned pattern is often repeated - a form of repetition called iteration - so many times that not only do you get objects that look similar, but also many that look nothing alike. To clarify this last point simply click through to here to see 11 different images all using the same pattern.

I'm also currently working on a paper that argues that the best way to approach objects for any experimentation - a word I use to describe both composition and rhetorical examination - is through Deleuze and Guattari's notion of the body without organs (BwO). For D&G in A Thousand Plateaus: 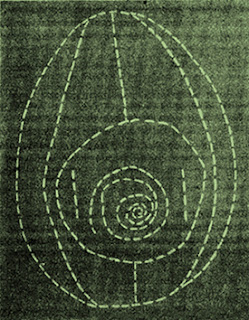 The BwO causes intensities to pass; it produces and distributes them in a spatium that is itself intensive, lacking extension. It is not space, nor is it in space; it is matter that occupies space to a given degree - to the degree corresponding to the intensities produced. It is nonstratified, unformed, intense matter, the matrix of intensity, intensity=0; but there is nothing negative about that zero, there are no negative or opposite intensities. [...]

The BwO is a childhood block, a becoming, the opposite of childhood memory. It is not the child "before" the adult, or the mother "before" the child: it is the strict contemporaneousness of the adult, of the adult and the child, their map of comparative densities and intensities, and all of the variations on that map. The BwO is preciesly this intense germen where there are not and cannot be either parents or children (organic representation). (153, 164)

The BwO is seen as the blank or recording space of an organism, across which flow intensities, forces, and (I would argue for OOO) qualities - i.e., local manifestations. Yet, the BwO is never before such qualities but exists alongside them and is independent from them and the larger organism. Nor does the BwO exist as a physical space for such qualities, but instead is an "intense matter."

So for OOO we can read the BwO as similar to the virtual proper being of the object, that part that withdraws or recedes but also maintains the capacity for other possible local manifestations. But why is this important? And what the hell does it have to do with fractals!?

Well as I understand it, objects for OOO are split - between a present, quality-rich part (for Levi, an object's local manifestations) and a withdrawing  aspect (or virtual proper being) that is the object's powers or capacities. What I would argue, then, is that this split is not so much a structure of being as it is a pattern of being. The difference between structure and pattern is akin to the difference Ian Bogost finds between process and procedure. Where structure offers us a sense of an object being composed, perhaps referring to an object's relations to other objects (think building blocks, or frames), pattern refers more to an object's hidden repetition - of its fractal-like irreduction of objects upon objects upon objects. This split-object pattern allows us to understand how it is objects come about or are actualized - and here is where the BwO comes into play.

For D&G the BwO should not be seen as an empty vessel set against organs but instead, "We come to the realization that the BwO is not at all the opposite of the organs. The organs are not its enemies. The enemy is the organism. The BwO is opposed not to the organs but to that organization of the organs called the organism" (158). The organism, then, is much like the OOO object in that it too is split between organs and the BwO. But to be actualized, the organism must be seen as a limit or stopping point. As Brett Buchanan states in Onto-Ethologies The Animal Environments of Uexküll, Heidegger, Merleau-Ponty, and Deleuze, “An organism proposes a solution only at a level where one has stopped counting affects, where the body has been taken as a formal and fully organized self-consistency” (161). Whether it is by choice, or simply because we cannot physically see (even with the help of microscopes or telescopes) the iteration of the object-pattern, this does not mean that it is not there. Because of the fractal pattern of objects we must realize that the object is never object qua object - it is never a whole or a one unless there exists a limit or self-consistency.

So that if I see my house key as nothing more than an object that fits a specific lock, I've actualized my key as an organism - as an object proper - and limited its BwO. No wonder I'm surprised when I find out that it is quite sharp (and could possibly be used to open up packages). However, if I see my house key as a BwO, I become fascinated with the intensities and possible local manifestations it can produce. I begin to experiment by introducing it into new environments, each time drawing out different intensities and qualities.

Unlike the dark shadow cast over the organism by D&G, an object-oriented approach relishes in the object as a whole (as an organism) precisely because of the object's hidden BwO and its local qualities/manifestations.

It is OOR's responsibility, then, to approach objects not as organisms - that is fully formed and limited structures - but as BwOs consisting of ever more potential local manifestations. Approached from this way, OOR's experimentations focus themselves not on what the object is but on how the object acts.
Posted by Nathan Gale at 12:18 PM